When I was 12 years old my mother took to see Elvis Presley at The Saenger Theater in New Orleans.  I still remember, we sat in the third row and I was mesmerized the entire time. Here was this young man with this gorgeous black hair and beautiful voice and rhythm in his body.  It was 1957 and from that day forward, I saw Elvis Presley every time possible, probably more than ten times, whenever he was anywhere close. I was even in the audience in Baton Rouge, when he didn’t do the show, and they announced “Elvis has left the building.”

I blindly loved him no matter what. That’s what a “fan” does. They idolize, giving no thought to rhyme or reason, they just adore. Elvis was my only serious musical idol. I, like so many others, mourned his passing.

Fast forward 62 years, and I have grandchildren age 5,15,19,20, and almost 22, but it appears I’m not immune from this happening again.  No, not Elvis coming back, I finally got over that, but there’s a new star on the horizon and in my heart, our own Louisiana boy.

In February I was walking through the kitchen when on TV I hear Ryan Seacrest say, “And this young man is from Livingston, Louisiana,” so I hesitated long enough to take a look, he was cute in his tee shirt and jeans, but then I went on. The next week I sat down to actually watch American Idol, and that’s when it happened.

His opening greeting was, “Who Wants to Party with a Hardy?” And the screaming began. That night, he wore a dark suit, and had his black hair brushed back.  He looked older than the week before, more mature, more professional, and then he started to sing. His eyes sparkled and he smiled along with lyrics, and I found I was smiling, too, with my heart. I fell hook, line and sinker.  I was gone, almost felt like a trance, mesmerized   by his talent, his southern charm, the tone of his voice, his meek smile that projected a sweet innocence, then curled with the mischievousness of someone who knows they are more than special.

For six weeks in a row, I voted for him 30 times a show (that was the limit if you used your phone, your computer and your iPad.) Then I got my friends and family to do the same.  And he won! What a thrill to see him at the mansion with John Bel and Donna, and in a crowd of thousands welcoming him home.  And it just keeps getting better, as his song, “Flame,” has reached #2 on I-Tunes and topping  Billboard  charts daily.  This Louisiana Bayou Boy will be the next Elvis, believe me!

So OK, I listen to Laine Hardy music before I go to bed or when I ride in the car, I read about him on the internet, I talk about him until my friends make me stop, but….I am not alone. Go to Facebook and discover, there are at least five or six fan groups such as Team Party with a Hardy; the official one with 16,085 members.  There’s even a Laine Hardy Cougar Group (which means anyone older than him) that has 465 fans (you have to apply to be accepted), and oh yes, I almost forgot his Instagram account TheLaineHardy has 622,000 followers. He posts messages and songs to his fans almost daily.  When Laine travels , (his home base is in Nashville right now), he shows boarding, picking up  luggage, and sometimes just comes on to say goodnight. How can you not love this guy? 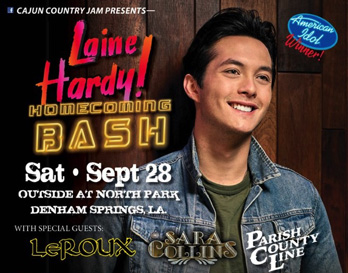 Surprisingly, his fan base, mostly female is at least 50% mothers and grandmas who just want to baby and take care of him.  The recent audience of the show I attended in Fort Worth was an equal amount of gray hair and walkers to pink hair and nose rings.

Why don’t you jump on the Laine Train and meet me in Denham Springs for the upcoming concert?  I got the handicapped sticker, if you got the lawn chairs!