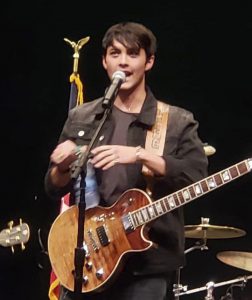 What a surprise to me when people read my recent column and asked the above question. What planet are you living on, was my first thought, but Larry quickly reminded me not everyone in the world watched network television, and not everyone cared who was the American Idol winner of 2019.

I was crushed. This teenage boy had almost consumed my life since he showed up on American Idol. When I saw him perform and heard that sweet voice sing “She Talked to Angels,” I felt he probably was one. But I really paid attention because of the announcement that he was from Livingston, Louisiana.

Loving our state and this area as I do, I decided we should all support this local artist. So I gathered my family, and told them how they could vote, actually vote, 30 times – 10 on computer, 10 on your phone, and 10 on IPAD. So the Reid clan did our 150 vote part each week. I didn’t see them do it, but they promised they did. In my heart, I’m sure that made a difference, and I am staking claim and credit right now for Laine’s success.

Laine Hardy (he has no middle name) was born in Baton Rouge in 2000 to Barry and Cindy Lou Hardy, and raised in Livingston, the third of three children. He started playing the guitar at a very early age and by eight had mastered a Walmart kids version and started saving up to buy the real thing. His big brother played guitar; he wanted to play guitar. By 14 he was playing in restaurants and bars with a band that included his older brother Kyle, friends and cousins. The key word there was “playing.”

He would not sing. A video streaming now on You-Tube shows how his music teacher at French Settlement School, and brother, Kyle encouraged him to try, but he wouldn’t open his mouth around anybody. Laine would go off into the woods, guitar in hand, or out on the water behind his house and sing for hours. He taped himself and then listened at home, taking criticisms and inspiration. He mastered it enough to be in the school play and to begin singing with the band, now called The Band Hardy.

They soon had a regular schedule, and Laine at age 16 was becoming a local much-in-demand star as he melted the hearts of women – young and old. Few young girls his age, were in the places where he sang, so his average fan was a woman who had grown up idolizing Elvis and was about to find her replacement king right in front of her.

The first time Laine auditioned for American Idol Season 16, he made it through and earned his golden ticket to Hollywood. Although his voice sounded a little young, soft, and a tinge pitchy, Luke Bryan still said, “Boy, you better watch out, you might just win American Idol.” Laine lowered his head afraid to acknowledge such a compliment from the judge. Unfortunately Laine never made it into the top 50.

For the Louisiana boy, barely 17 this had been an experience he would not forget, and neither would others. Laine left Hollywood with rapidly building Facebook numbers, You-Tube Channel distribution, and an Instagram page with thousands of followers who knew his name, and wanted more of the Bayou Boy.

In 2018 Laine left Hollywood knowing he wasn’t ready to seek such heights, but the set-back brought about a vengeance in his soul. He returned home prepared to prove he wasn’t a loser.